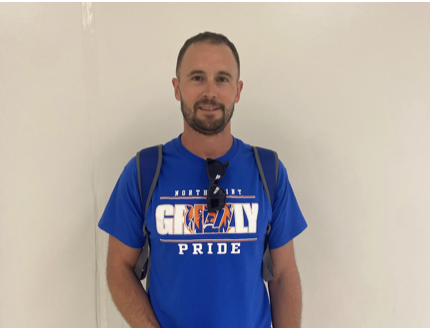 Coach Lacy is a new health and P.E. teacher who also coaches basketball.

As more and more teachers make their way into the grizzly nation, it is time to get to know them a little better. It is only the second year at North Point, which makes room for new talented teachers and coaches.

Today we are getting to know coach Lacy. As a PE, health, and basketball coach he knows a few things about setting goals.

¨My goal is to watch players progress and grow throughout the year,¨ Lacy said.

Formerly a coach at Troy High School, Lacy is excited to join the North point staff.

¨I like the idea of going to a new school and doing new things,¨ Lacy said.

Coach Lacy has big plans for his future. He wants to eventually be a principal as he got his degree at Central Methodist University in administration and physical education.

¨Right now I want to be a coach, but in the future I would like to be a principal,¨ Lacy said.

Diving deeper into his personal life, it is apparent that Lacy has a few fun things that make him unique. Food is one of these.

¨I am definitely a pizza guy,¨ Lacy said.

A lot of people like pizza, but he is specifically a thin crust guy.

Coach Lacy thinks North Point is the best place for his goals and mindset. We know he will do great things for both students and athletes.

On a really personal level, one thing that no one knows about him is one of his favorite TV shows.

¨But then everyone will know that about me,¨ Lacy said. ¨My favorite Netflix show is “Pretty Little liars”.¨

Coach Lacy has a bright future ahead of him.