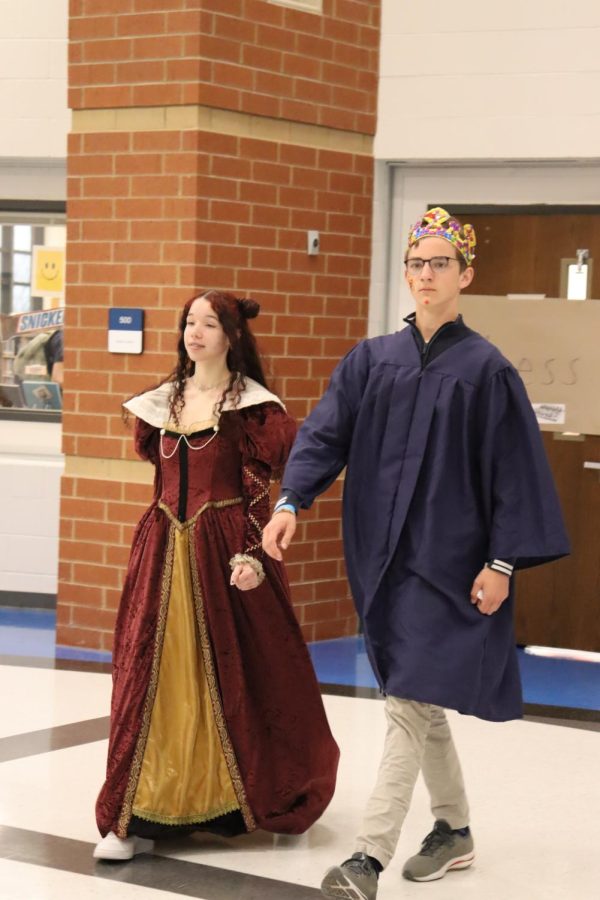 As the king, Severin Bohn (’24) and queen, Makiya Bolden (’25) of the last banquet enter, the audience yells “Huzzah!” “I had to come to America to become King,” German exchange student Bohn said.

Inaugural Shakespeare Festival is a Hit

Gallery|40 Photos
Adianna Lynne
Acting out the death scene from "Romeo and Juliet", Iris Swafford whispers to Addisyn Bryson ('25). "We performed the scene three times and we had a lot of fun with it," Bryson said. They practiced several times during English class.

Our 1st Annual Shakespeare Festival was a hit despite the weather. Students prepared for this festival for weeks by reading Shakespeare poems and plays, choosing a job for the festival and making props and costumes for the festival. On the day of the festival, students had rotations to follow. Some worked first, some ate at the banquet first and some enjoyed the booths, activities, games and other festivities first.  There were several choices, including face painting, fortune-telling, a photo booth, archery, skittles, quoits, battledore and shuttlecock, test of strength, a cupcake walk, actors on stage, a puppet show, calligraphy, mask making, crown making, wand making, Ha’Penny, chess, pall-mall, corn hole, nine men’s morris, and primero, as well as jesters, mimes, musicians, and singers walking around.