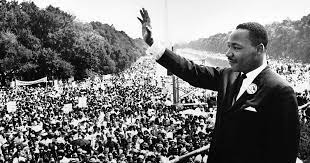 This month is all about celebrating the great things in Black History.

One of the first people that come to mind is Martin Luther King Jr. King was born Jan. 15, 29’ in Atlanta Georgia. His real name was at first Michael, but changed it to Martin as a gesture to the Church that he was a part of and to his father. His mother, Alberta Williams King, and his father, Martin Luther King Sr. were a big part of the life of the world-changing social rights activist.

King did something that many thought was not possible. In the “I have a Dream”speech, King spoke of the perfect world where racism and segregation were no more. This inspired many African Americans and followers to attend a “March to Washington” in 63’, raising awareness for the problem. This march was able to convince John F. Kennedy to create a civil rights bill in Congress.

“Our lives begin to end the day we become silent about things that matter”. This was said by King and is one of his most famous quotes. This powerful statement says that the day when the voice of the people, any people, can not be heard, then the things that matter most will not get resolved.

“Hate can not drive out hate, only love can do that”. Another strong statement from King. When the people fight hate with more hate, things will never end well. Someone or some group needs to be the bigger person and end this discrimination.

“We must learn to live together as brothers or we will perish together as fools”. This statement says that everyone must work together or we will fall. It is such a powerful statement that needs to be shared around the world, even today.

It was strong quotes and humbling acts that made Martin Luther King the selfless, loving and intelligent man that is remembered today. Without the acts of King, the world would be a very different place filled with more racism and discrimination that is not needed in today’s society.